"I found my confidence and love for the performing arts through Mrs. Keppner's methods of teaching.  She elevated me to become one with my character in our play and motivated me to develop myself into a confident student and leader among my peers. I was proud to be a student of Mrs. Keppner's Shakespeare class."  ~Samantha J., former student

"Working with Rachel Keppner, as a student, an actor, and assistant director, was always a joy. We continuously played off each others sassy personalities and always had fun. Not only did I have a great time whenever I worked with her, I also was able to learn so much no matter which capacity I was in at the time. It's because of Rachel's loving influence and desire to push me that led me to where I am today as a classical theatre practitioner."  ~Jean Y., former student

"Rachel is an amazing director! My shy daughter loved working with her. By show time, no one would have guessed that she was nervous at all. I asked My kids who their fave teacher was, and this was of all time. [My daughter] named [Mrs. K]."
~ Elise H., mother of a student

About the Author and Mentor 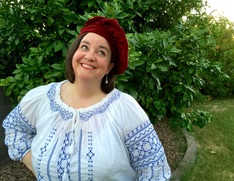 Rachel Keppner (or Mrs. K., as she's known to her students) began performing onstage at the tender age of eight, and has been active in music, choirs, concerts, and drama programs in her church and community ever since, wherever she lives.  She continues to stay busy in her homeschool community and enjoys speaking at homeschool conferences. She loves teaching her own Shakespeare class, directing plays, designing and sewing Renaissance costumes, and both singing and reading with her family.

Highlights of her performing experiences include: